Black holes likely hold important clues to several remaining mysteries about the universe, such as the theory of quantum gravity (link), the preservation of quantum information (link), the properties of quantum entanglement (link), and the evolution and interaction of galaxies (link). Black holes bring together a wide array of fields of physics --including thermodynamics, statistical mechanics, general relativity, quantum mechanics, classical mechanics, and electromagnetism (links here, here, here, and here) -- in a way that no other entity in the universe seems to do. I'm not an expert on these issues, but enjoy following them at a distance from my area of statistical and thermal physics. In this blog post, I'll present a very brief history of black hole theory and observational evidence, followed up by a concern I had about the resolution of the EHT image, and then a desctiption of the reasons why my concern was not necessary.

First a bit of history, as much as a reminder for me as for any readers. The image released by of the black hole at the center of the galaxy M87 by the EHT collaboration on April 10, 2019, is considered the first direct observation of the existence of black holes. The idea that a black hole, an object with gravity so strong that light cannot escape it, could exist, actually surprisingly dates back to the Englishman Michell and the Frenchman Laplace in the 18th century. The black hole was theorized mathematically with more plausibility soon after Einstein developed general relativity in 1915, first by Scharzschild in 1916. There was a good deal of discussion and controversy by the likes of Eddington, famous for this clear expositions of general relativity and his international expedition to show that sunlight was bent by the amount predicted by Einstein's theory, Eddington's work helped make Einstein an international celebrity almost overnight in 1919 and 1920.

More definite theoretical work was done in the 1960s, including the 'no-hair' theorem by Werner Israel which demonstrated that black holes -- if they indeed existed -- would be characterized only by their mass, their charge, and their angular momentum (that is, three numbers). In the early 1970s, Bekenstein and Hawking expressed the entropy of a hypothetical black hole in terms of its area (which can be related to its mass, and then through E=mc^2 to its energy). Hawking then showed that energy in the form of electromagnetic radiation, called Hawking radiation, would in fact be emitted by a 'black' hole due to quantum processes occurring at its event horizon. This was if I understand it an application of quantum theory to a weak-field limit of general relativity at the event horizon -- the application of quantum theory to the strong fields within and near the central singularity of the black hole are still beyond us, and are one of the areas that quantum gravity is trying to wrestle with.

Then came indirect observational evidence from the astrophysics community, from two of the advanced space-based telescopes -- the Hubble Space Telescope (HST) launched in the early 1990s and the Chandra X-ray observatory (CXO, or CXC alternately) launched in 1999. The Hubble telescope observed several galaxies with clear pictures of dust clouds and accretion disks. As nicely summarized here, in the 1990s, the evidence from the rapid rotation of matter at different radii from the center of the galaxies indicated central objects with enormous masses and limited spatial extent, enough above the so-called Chandresakhar limit to be extremely likely to be a supermassive black hole. Another piece of evidence came in 2001 from the observation of a change in wavelength of light from matter presumably falling into the event horizon, from ultraviolet into the infrared as the gravity of the black hole stretched out the wavelength of the emitted light, as written up nicely here. With the launch of the CXO in 1999, more indirect evidence came in the observation of high energy jets which form in the plane perpendicular to the nearly flat accretion disk of infalling gas. See a beautiful artist's rendition here. These jets of relativistic electrons and protons emit across the EM spectrum but especially powerfully in the X-ray range; there still appears to be some mystery as to how the radiating jets travel as far as they do.

Now the first direct observation of a black hole, in the form of a radio wave image of a silhoutte of the black hole against the surrounding infalling gas plasma, has appeared on April 10, 2019. This is the now famous image of that black hole, a monster from the center of galaxy M87 some 54 million light years away. 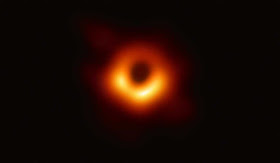 A few interesting things to note from the image are that the central black spot is actually about 2.5 times the size of the black hole, that the color in the image was chosen arbitrarily since it is a radio wave and not visible light image, and that the bottom half of the light ring is brighter than the top half because the radio waves in the bottom half are being emitted by hot gas plasma moving toward the earth as opposed to away from it, These features and more are described in this excellent blog post by Matt Strassler.

Doing some thumbnail calculations of the imaging led me to be confused for a few days, and I thought describing that confusion and its resolution could be interesting. Using the figures provided of the black hole being 40 million km in diameter and 54 million light years distant from Earth leads to an angle subtended in the sky of an incredibly tiny 16 micro-arcseconds, roughly equivalent to viewing a grain of sand on the ground from the height of an airplane in flight. The whole light ring is about 7.5 times as large, corresponding to 120 micro-arcseconds. To resolve an image, the minimum diffraction spot size should be appreciably smaller than the image size, so as to yield a sufficient number of independent pixels.

The EHT is made up of a network of eight radio telescopes, with a total spread about equal to the diameter of the Earth. I figured this would provide resolution somewhat worse than a Earth-sized continuous radio disk, so as a best case took the diffraction spot size angle equal to that of the Earth-sized disk. This is given by the expression 1.22*lambda/D (in radian measure), where lambda is the wavelength of radiation being used and D is the telescope (aperture) diameter. The wavelength used by the EHT would provide better resolution if it were in the infrared or visible spectrum, but those shorter wavelengths undergo significant atmospheric distortion and noise, so the EHT team chose 1.3 mm as a compromise between reducing atmospheric distortion and increasing angular resolution. With the diameter of Earth at 6400 km, we get a diffraction spot angle of 51 micro arcseconds.

That sounds pretty small, but from the image angular size of 120 micro arcseconds, this gives us only ~2,5 pixels across the diameter of the image, and a total of 2.5^2 ~ 6 independent pixels in the full image! This made me think think for a day or two that the black hole image above was mostly smoothing and a preconceived idea of a circular black hole and its rotating accretion disk should look like, and was based on too little true visual information (six pixels). Fortunately, looking into the paper on the image processing here, this turns out not to be the case, for three main reasons that I don't fully understand yet, but can at least pass on.

First, it turns out that having multiple telescopes in a VLBI array actually improves resolution beyond the diffraction limit of a single large-scale dish. I haven't studied why this is so, and it seems counterintuitive, but it's well-referenced in the paper. The effective angular diffraction spot size is actually about 25 micro arcseconds rather than 51, giving 5 pixels across the image diagonal and about 25 total true pixels worth of visual information -- a big difference. Second, the atmospheric distortion which is there at 1.3 mm can be fairly well compensated for using an ingenious technique called phase closure -- combined with the eight total telescopes in the EHT array, as described in and around equation 3 of the paper. Third, an image processing algorithm called CHIRP does a more robust and accurate job of reconstructing test images with noise and blur and loss than do previous algorithms, as seen in Figure 5 reproduced below. 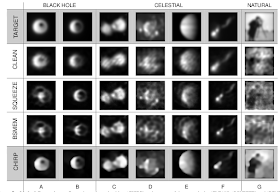 So there are by my count 25 real pixels, the atmospheric distortion is minimized and controlled for, and the reconstruction from limited number of pixels works well for a variety of test images, There is probably a bit of smoothing in the released image, but I think i understand now that it's basically sound, and the general outline of why. Further improvements in imaging in the future can come, as mentioned in the paper, from decreasing the wavelength used below 1 mm and by beating the single-disk diffraction limit by a wider margin.  Both of these would require an array of more radio telescopes, if I understand the physics correctly.

Any comments or questions are welcome!